In Innovation or Retreatism: What should students in environmental studies be learning? (part 1), I introduced Robert K. Merton’s structural strain theory of deviance as a possible way of thinking about how those of us in the field of environmental studies, especially those who teach a political economy perspective, should be talking about individual and societal responses to environmental crisis. The basic idea is that Merton’s structural strain theory might be creatively employed by considering some sort of sustainable society our goal with individual behavior change and policy reform serving as the two dominant approaches to achieving the goal. The structural strain occurs in the form of feelings of the inadequacy of individual actions and inefficacy with regards to making policy change happen. Before continuing my application of a political economy perspective to this adaptation of Merton’s theory, let’s review what the political economy perspective is, at least in relation to society’s environmental problems.

At the end of part 1, I had finished illustrating how a political economy perspective encourages a rejection of conformity and ritualism as both embrace the strategies of individual responsibility/policy reform (see my explanation of these terms in part 1 if their meanings are unclear). Rebellion is also problematic, unless the new goal put forth sufficiently envisions a post-capitalist political economy capable of eliminating the structural relations that lock society into unsustainability. That leaves us with innovation and retreatism, which I promised to discuss in this post.

A weak political economy perspective might embrace innovation, even pointing to the rise of the sharing economy and its leveraging of modern technology and the innate human tendency towards sociality to move us from an ownership to an access economy. In other words, a sustainable capitalism is possible, but it’s not going to happen through green consumerism (which is rooted in the old ownership economy) and policy reform (since the sharing economy does not fit into the legal frameworks that shaped existing policies). The sharing economy is a type of cultural impulse generated largely by those in the demographic we’ve come to call Millennials. Rejecting old cultural goals like fancy cars and large suburban homes for car-free urban lifestyles, Millennials embrace the sharing economy for its ability to deliver a high quality of life without the high quantity of goods. 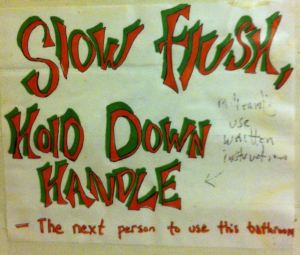 Apparently other generations believe “Millennials use written instructions” according to this sign over a toilet in an anti-hipster cafe.

The jury is still out on whether the shift to access and away from ownership translates into smaller carbon footprints. Anecdotal evidence suggests it does–people own less, buy less, consume less, drive less, etc. But the debate rages on, as illustrated in a range of articles such as those at ensia and TriplePundit A frequently cross-posted piece by sociologist Julliet Schor, “Debating the Sharing Economy,” perhaps provides the best summary of the all the questions about the sharing economy that remain to be answered.

So what does the political economy perspective have to do with these questions? We teach the political economy perspective precisely because it gives us tools for asking, and perhaps answering, critically important questions about the sharing economy, or any other innovations or cultural impulses, that seem to be emerging as potential alternatives to consumer capitalism. In the case of the sharing economy, we can interrogate the logic shaping it. We can ask what its ultimate goals appear to be. Is the goal of the sharing economy, for instance, to supplant capitalism as we know it with a more sustainable system? In Is the Sharing Economy Making Cities Less Cooperative? Julian Agyeman and Duncan McLaren hint that it might be little more than a wolf in sheep’s clothing:

Taskrabbit, started to make it easier for neighbors to help each other out with errands and chores, is becoming a glorified temping agency, leaving its participants in the same precarious boat as those on zero-hour contracts. Uber, in theory a ride-sharing company helping cut congestion, is turning into a luxury taxi company serving the global footloose elite.

A political economy perspective allows us to examine how, or whether, power structures of the old system are being reproduced in the new sharing economy. Whether the sharing economy, urban agriculture or bicycling for transportation, these real phenomena, or cultural impulses, demand our critical attention. I try to give students hope by pointing to these little tremors and encouraging them to dive into them while constantly asking the kinds of critical questions a political economy perspective raises. With their critical perspectives, they can identify when a cultural impulse like urban agriculture is being co-opted by the same powerholders that maintain, through intense profit accumulation and political control, the status quo of an unhealthy and unsustainable food system.

Has the food truck revolution, as seen here in San Francisco’s weekly “Off the Grid” event in the Presidio, made the food system more sustainable?

Understanding how these power structures work, a student embracing a political economy perspective might be able to steer a cultural impulse such as urban agriculture clear of co-optation and increase its chances of supplanting power, even if in a small way. Hopefully, such a perspective would also allow them to resist the misuse of sustainability, for example, as a buzzword to justify endeavors clearly inconsistent with the goal of a just, equitable and sustainable society. Julian Agyeman and I wrote about just such an example in No, That Parking Spot Does Not Belong to You, critiquing the claims of Monkey Parking, an app that creates private profit from public parking spaces, that the app would reduce trolling for parking spaces and thereby reduce CO2 emissions.

My motivation for this series has been to think through how a political economy perspective, rather than being little more than a disempowering intellectual exercise, can be employed constructively to leverage one’s limited power in ways that meaningfully challenge our existing system and/or create spaces for the emergence of alternative systems. I’ve done so by employing the structural strain theory of deviance developed by social theorist Robert Merton. For Merton, innovation is but one of the five options available to individuals experiencing structural strain (an inability to achieve culturally approved goals because of one’s position within the social structure). In part 1 I discussed conformity, ritualism and rebellion as responses to the sustainability structural strain I explained at the outset of this post. And although I promised to discuss innovation and retreatism here, having exceeded 1,000 words I’ll save discussion of retreatism, the reaction with which I am most concerned and that I fear the political economy perspective may produce in students, for part 3.