I arrived in Finland Tuesday evening for a six-week stay as Visiting Researcher at the Environmental Policy Centre of SYKE (Suomen ympäristökeskus), the Finnish Environment Institute. The head of the Environmental Governance unit of SYKE’s Environmental Policy Centre, Eeva Primmer (@EevaPrimmer), coordinated my visit and timed with my arrival a seminar yesterday on “Sustainability Experimentation: Interplay between Grassroots and Institutions.” As I’ve described briefly in other posts and on the SEVeN page under the Projects menu, one of my current projects engages an area of research known as sustainability transitions. According to the Sustainability Transitions Research Network, the notion of sustainability transitions arises from the assumption that “due to the specific characteristics of the sustainability problems (ambiguous, complex) incremental change in prevailing systems will not suffice.” Furthermore, multiple factors make existing systems (known as sociotechnical regimes among transitions researchers), quite resistant to the kind of change required to achieve sustainability goals. These include, among other factors, technical infrastructures and institutions with embedded knowledge and capabilities, economies of scale that crowd out competition and suppress innovation, and even the everyday habits, lifestyles and values that build up around a sociotechnical regime.

Perhaps the simplest example of this is the dominance of the internal combustion engine as the preferred drivetrain technology for automobiles. The recent revelation of Volkswagen’s deception illustrates how a sociotechnical regime resists change. VW was so unwilling to innovate in the field of electric vehicles, and so committed to diesel technology, that it chose to deceive regulators rather than acknowledge the inability of its technology to meet new emissions standards. These new emissions standards, by the way, reflect the way in which the wider landscape (in this case the policy landscape) can place pressure on sociotechnical regimes. Without spaces for innovation that can facilitate the regime’s adaptation to landscape changes, the regime risks being overturned entirely.

Consistent across these accounts is a pattern in which regime-changing innovations arise from entrepreneurs, social groups and other actors who happen to be networked with the dominant institutions within a regime. Consequently, transitions come to be seen as a function of formally recognized actors challenging elements of the system through official institutions and channels (e.g., markets, policies). According to one researcher, the niche focus within the MLP tends towards an entrepreneurial and managerial position “in which public authorities and networks of innovative institutions are placed at the centre” (Jørgensen 2012). This brings us back to “Sustainability Experimentation: Interplay between Grassroots and Institutions.” 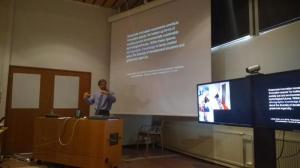 Discussing grassroots innovations during the seminar.

Pradip Swarnakar, with whom I conceived and am collaborating on SEVeN, and I define sustainability experiments as “local experiments in alternative behaviors, practices, traditions, technologies, and institutions to sustain a group or community in the face of socio-ecological disruption.” Elsewhere they have been defined as “small initiatives in which the earliest stages of learning takes place [and that] bring together new networks of actors producing new combinations of knowledge, capabilities and resources, solving a problem in a novel way” (see Berkhout et. al. 2011). We are particularly interested in the sustainability experiments happening at the grassroots level, especially those happening informally and perhaps even beneath the level of the niches identified as part of a larger institutional framework in the MLP.

Our hypothesis is that there is valuable knowledge being produced in these experiments, but given that they occur at sub-institutional levels the knowledge is generally invisible at higher levels. SEVeN is intended to aggregate existing sustainability experiment knowledge and facilitate accumulation of new knowledge as it emerges. Additionally, the database we envision at the heart of SEVeN would organize and structure this unstructured data (i.e., knowledge generated by grassroots sustainability experiments) to facilitate synthesis and analysis. Finally, SEVeN would make the data accessible for ease of dissemination.

Below is the presentation I gave as part of the seminar on “Sustainability Experimentation: Interplay between Grassroots and Institutions,” which provides further background on the challenge of sustainability transitions and how we imagine aggregating knowledge from grassroots sustainability experiments can perhaps address this challenge. Of course, we realize that the enormity of the challenge requires top-down change as well. Throughout the seminar, discussion centered around how to bridge the knowledge produced from grassroots sustainability experiments with the power embedded in higher level institutions to drive (or resist) system-wide change. In subsequent posts I’ll share details of the other presentations and the discussions that ensued.

View this document on Scribd